We’re almost done looking at the sounds of Proto-Indo-European. We’ve covered the majority of the consonants already, but before I get to the remainder (mainly the voiced aspirates), or to the vowels, we need to pause for a moment to look at one of the most dramatic developments in the study of the Indo-European languages: the discovery of Hittite.

The comparison of the older Indo-European languages really got going in 1816, when a guy named Franz Bopp published a long essay, now regarded as the first scientific publication on the subject. The field developed considerably over the course of the 19th century, and by the time a century had gone by Proto-Indo-European was reconstructed in very considerable detail, to the best of the ability of scholars given the data then available. This centennary was marked by the publication in 1916 of the final volume of a massive compendium on Indo-European written by the enormously influential scholar Karl Brugmann.

But even as Brugmann was labouring away at his magnum opus, workers in what is now central Turkey (then part of the Ottoman Empire) were literally digging up materials that would transform the study of Indo-European. Near the small village of Boğazköy, archaeologists had discovered the ruins of a major ancient city, which we now know was Hattuša, the capital of the Hittite Empire (roughly 1600-1200 BC, or 8400-8800 Holocene reckoning). In 1906, they struck linguistic gold: a collection of clay tablets, inscribed with cuneiform script, and hardened by the fires that destroyed the city (there are some real advantages to writing on clay over paper, at least if your goal is to be read by strangers thousands of years in the future). 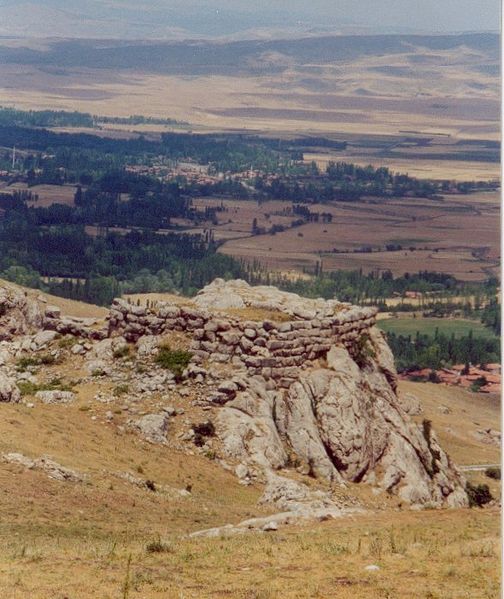 View of buildings at Ḫattuša

While the cuneiform script in general was already known, many of these tablets were in a language (or rather, several languages) which were a mystery at first. It wasn’t until the middle of the First World War that a Czech scholar named Bedřich Hrozný made a compelling initial attempt to decipher the Hittite language and link it to the Indo-European family. In the following years and decades, this hypothesis was very much substantiated, and Hittite – and its close cousins such as Luwian and Lycian, collectively known as the Anatolian branch of Indo-European – has given us a great deal of valuable new data to use in reconstructing Proto-Indo-European. 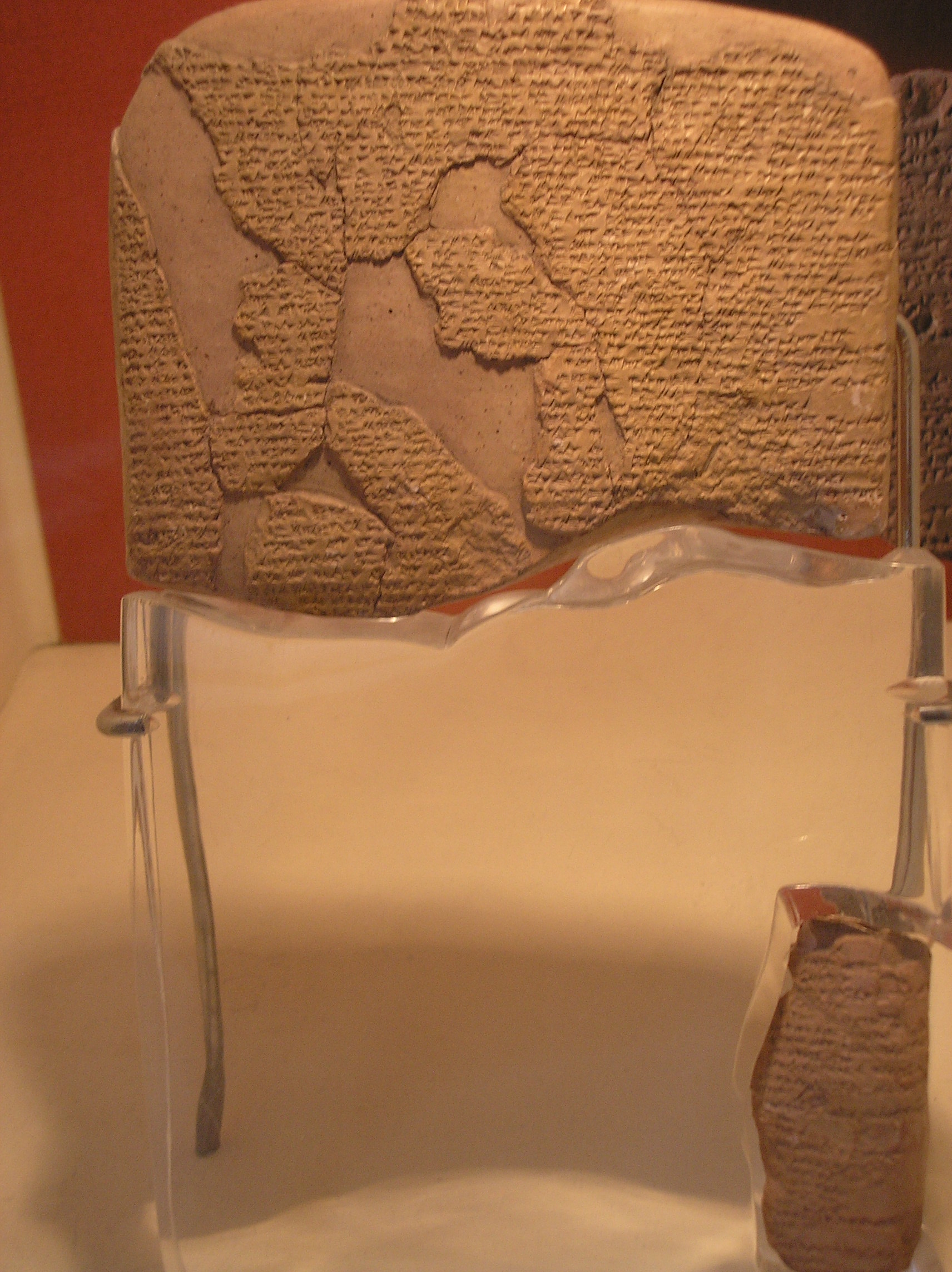 (More data still has come from the Tocharian languages, discovered in Central Asia at around the same time, and quickly deciphered. These languages were recorded much later than Anatolian, from around the 5th to 10th centuries AD, and have not had quite as dramatic an impact on our understanding of Proto-Indo-European as Hittite and its closest relatives.)

One of the major ways that Hittite influenced our understanding of Proto-Indo-European was in the sound system. The core set of vowels reconstructed by folks like Brugmann was fairly simple: there were five basic vowels, *a, *e, *i, *o, and *u, each of which could be pronounced either with ‘normal’ length (referred to as short vowels) or held for an extra half-beat (in which case they are called long vowels). The long vowels are specially indicated with a bar on top, called a macron: *ā, *ē, etc. Linguists of this time also reconstructed a reduced vowel *ə (schwa), which was involved in some rather complicated grammatical alternations.

Hittite, however, complicated our reconstruction of these vowels a lot. In words where scholars like Brugmann had reconstructed *ā, Hittite instead showed a sequence aḫ, where ḫ is a way of writing something that was probably something like the German ch-sound (though the exact pronunciation is very much debated). For example, Latin has a verb pā-scō, meaning basically ‘take care of a flock or herd’, with various senses such as ‘feed, support, pasture’, which was traditionally taken to go back to a Proto-Indo-European verbal base *pā-. In English, we’ve borrowed words like pastor and pasture from Latin words related to pāscō, and we also have Germanic words like food and fodder – the second still shows the sense of feeding and raising up livestock that go back to Proto-Indo-European, and both show the effects of Grimm’s law in the change of the initial consonant (as well as various further changes, of course). 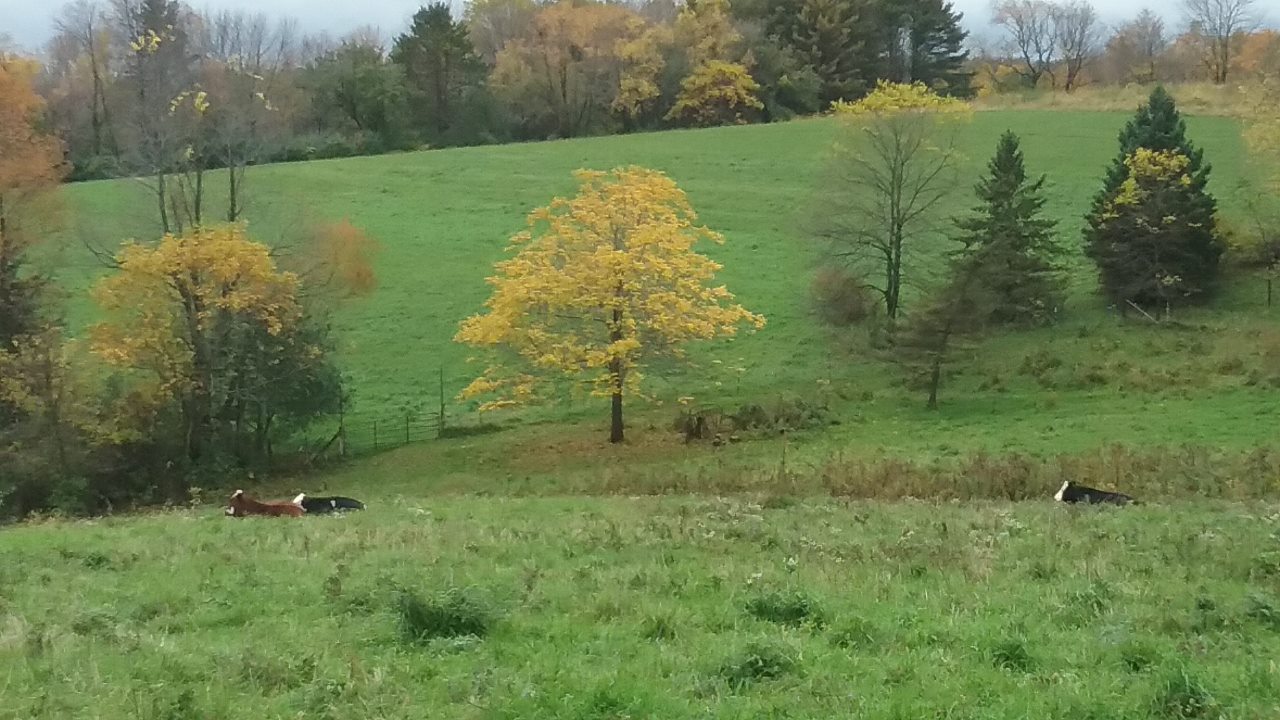 The cow pasture at my parents' home

Other Indo-European languages known in the 19th century also have forms like pā- (or things that could develop from this by regular sound changes), but Hittite is different. There, scholars found a related verb paḫ-sa with the sense of ‘protect’, with a base element paḫ- instead of pā-. There are various possible theories one might come up with to relate paḫ- and pā-, but the one that seems the best supported by looking at all the evidence is that the Hittite form is the more archaic, and more representative of Proto-Indo-European in this respect.

Basically, we assume that Proto-Indo-European had a verbal base that was something like *paḫ- (we actually write *h₂ instead of ḫ, which I’ll explain in a minute). In all branches of Indo-European except for Anatolian, there was a change whereby *ah₂ became *ā – the consonant disappeared, but lengthened the vowel before it. This kind of change is called ‘compensatory lengthening’, the idea being that the vowel is pronounced longer in order to ‘compensate’ for the loss of a consonant, keeping the overall length of the syllable roughly the same (developments like this are pretty common in language change). 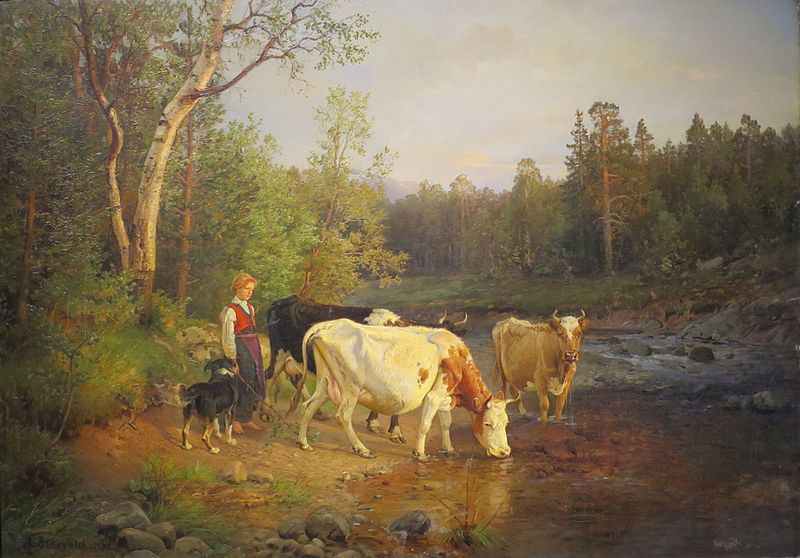 A herder keeping watch over her cattle

Furthermore, we now think that not it was not just the length of the vowel that was affected. If you look up the etymology of pasture or food, you probably won’t find *pah₂-, but *peh₂-. The idea is that the consonant *h₂ first ‘coloured’ any *e’s next to it, turning them into *a’s. So the development of this particular verbal element would be *peh₂- at the oldest stage, which was then ‘coloured’ to *pah₂-. This is as far as the Anatolian languages went, and Hittite keeps paḫ- around without much further change. The rest of the family, however, was affected by compensatory lengthening, turning *pah₂- into *pā-. From there, each branch more or less went its own way.

Finally, one last important rule about *h₂ involves grammatical alternations. Brugmann and his colleagues had noticed that roots with *ā sometimes showed different vowels. So alongside Vedic gō-pā́- ‘cow-protecting’, with pā-, there was an abstract noun gō-pīthá-, etymologically ‘cow-protection’ (though coming to mean just ‘protection’ in general). They explained this by suggesting that there were two ‘ablaut’ variants of the same root: a full *pā- (found especially when accented, *pā́-), and a reduced *pə- (found especially when unaccented), with the schwa *ə becoming a in most branches, i in Indic (and partly in Iranic), and doing more complicated things in Greek. Nowadays we still kind of keep the schwa around, but can explain it better. We reconstruct a ‘full’ form *péh₂- and a reduced form as basically *ph₂-, with the schwa inserted to break up the consonant cluster: *pəh₂-. 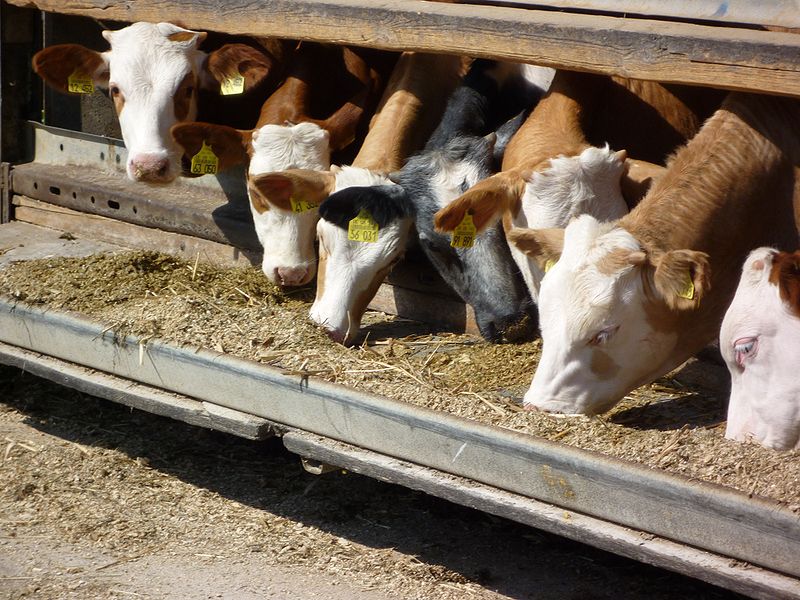 Cows not in a pasture eating fodder (corn silage)

(I’ll explain ablaut properly in a later post, including the possible relationship between accent and ablaut.)

Now I should probably explain why we write the ancestor of Hittite ḫ as *h₂. As the subscript number might suggest, we don’t reconstruct just one consonant of this class – actually we now posit three, written very creatively as *h₁, *h₂, and *h₃. All three cause compensatory lengthening, but they do different things in terms of ‘colouring’. We’ve already seen that *h₂ turns a neighbouring *e into *a. The consonant *h₃ causes a different type of colouring, turning a neighbouring *e into *o (the o in Latin-derived words like donate ultimately goes back to *deh₃-, coloured to *doh₃-, and lengthened to *dō-). And *h₁ causes no colouring at all: a neighbouring *e stays *e, as in the word deed, which goes back to Proto-Indo-European *dʰeh₁-tis.

This set of reconstructions – of the three consonants *h₁, *h₂, and *h₃, along with the major rules of colouring, lengthening, and the insertion of schwa, as well as various other details that go way beyond the scope of our discussion today – is collectively known as ‘laryngeal theory’. Why ‘laryngeal’? There was an early suggestion that these three consonants were articulated in the voice box (the larynx), and this term has stuck around out of tradition. Actually we don’t know how any of these consonants were pronounced. Quite a few people think that *h₁ was pronounced as /h/ or a glottal stop, both of which really are laryngeal consonants, but this is by no means certain, and it seems very unlikely that all three of these sounds were actually laryngeal. But since we don’t have a better term, that’s what we’ll keep on calling them.

The work by Franz Bopp that I mentioned as the first scientific work of Indo-European linguistics has the nice short title of Über das Conjugationsystem der Sanskritsprache im Vergleichung mit jenem der griechischen, lateinischen, persischen und germanischen Sprache. (On the Conjugation System of the Sanskrit Language, in Comparison with that of the Greek, Latin, Persian, and Germanic Languages.) There's an excellent general history of nineteenth-century linguistics, which gives the intellectual context for Bopp and traces how the field developed over the following decades, by Anna Morpurgo Davies,

The idea of what we now call laryngeal consonants actually predates the discovery of the Anatolian languages, and was first proposed by the eminent linguist (most famous as one of the founders of the structuralist school of linguistics) Ferdinand de Saussure, in an 1879 essay on Indo-European vowels. This idea was taken up by some of his contemporaries (including Hermann Møller, who came up with the term ‘laryngeal’), but didn’t make it into the consensus reconstruction of Indo-European.

The integration of Saussure’s theories, Hittite ḫ, and the already mainstream reconstruction of schwa really began in 1927, with an essay by the Polish linguist Jerzy Kuryłowicz, ə indo-européen et ḫ hittite (‘Indo-European ə [schwa] and Hittite ḫ’). In the decades isnce, ‘laryngeal theory’ has taken off, and is now a core part of mainstream work on Indo-European. You can find a good explanation of the modern forms of laryngeal theory (which have come a fair ways since the pioneering work of Saussure and Kuryłowicz) in most textbooks, including Fortson’s (which I recommended a couple of posts back).

If you’re interested in the Anatolian languages, the place to start is certainly Hittite, for which there is a pretty decent introductory textbook, Theo van den Hout’s The Elements of Hittite. I also have something of a soft spot for Hieroglyphic Luwian, which I mentioned briefly in the previous post. For comparative reference to Hittite, there are a number of etymological dictionaries – Matthew Scarborough gives an excellent breakdown of these as part of his blog series on Indo-European etymological resources.

For the Holocene calendar that I briefly mentioned, see the Wikipedia entry.

Next up: Bear
Previously: Raw