In the last couple of posts I’ve been talking about how we reconstruct Proto-Indo-European. Today, I want to start looking at what we reconstruct. Just what did PIE, the earliest reconstructible stage of English, sound like? How did it work grammatically? There are many very fat books written on these things, and I hardly mean to go over every last detail, but since this is the starting point for last 5000 years or so of English’s history, it’s probably a good idea to look at a few of its main features. Besides, what’s the point of writing about the history of a language if we don’t look at some actual language along the way?

Today, let’s get a start on phonology, on what PIE sounded like. Proto-Indo-European is usually reconstructed as having some 24 or 25 consonants. For comparison, most standard varieties of modern English have 24 consonant sounds. (We have fewer consonant letters, of course, which is why we have to use so many digraphs like sh and ch.) Nearly half of the consonants are more or less the same, aside from being written with an asterisk to mark them as reconstructed: we find voiceless stops in PIE, like *p, *t, and *k, and voiced ones, like *b (possibly – this is the debatable consonant that makes the count, 24 or 25, uncertain; I’ll give this sound its own special hearing in a later post), *d, and *g. PIE also had the nasal consonants *m and *n, the fricative *s, and two sounds that are often called ‘liquids’, *r (probably more of a trilled r then the usual English one) and *l.

Chart of PIE consonants from Kapović 2017, p. 13.
Most handbooks will give a similar chart, with minor differences of notation.

Then there are sounds that are simple enough, but raise some issues of notation. Let’s take yoke, our word of the day. A tool for harnessing two animals together – oxen for plowing, horses for racing, things like that – the yoke has been around a while, and the word is a nice old one. We find lots of related words: German, for example, as Joch, and Dutch juk. Looking outside of Germanic, Latin has iugum and Sanskrit yugám (both with g corresponding to Germanic k by Grimm’s Law). That’s three different ways of writing the initial consonant: y, j, and i. But this difference in spelling conventions is just that: a matter of spelling. All of the forms just cited begin with the same sound as English yoke. 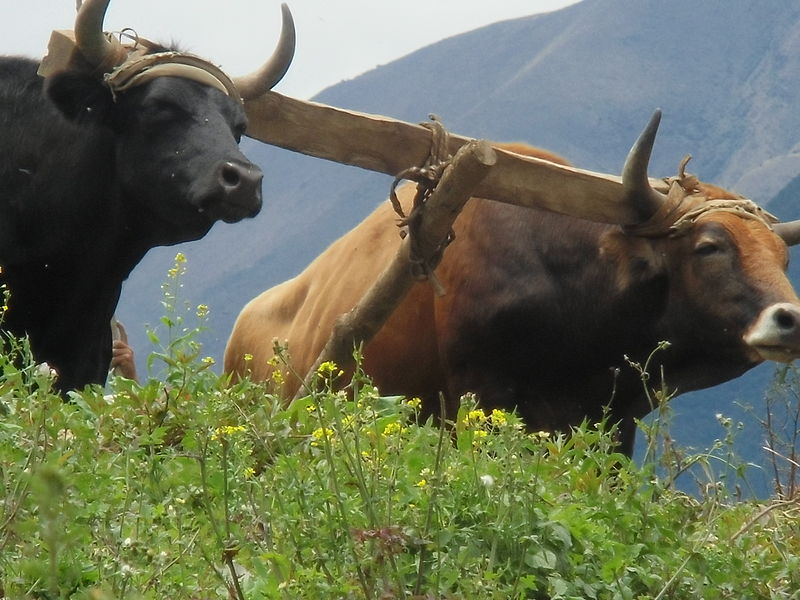 Yoked oxen. 'Ox' is also from PIE, reconstructible as *uksén-.

All of these forms come from languages with written traditions that have come up with different ways of indicating the y-sound, but what do we do for Proto-Indo-European? This, after all, is a reconstructed language, and the PIE-speakers themselves had no writing. When modern scholars came to start writing books and articles about PIE, they had to come up with a way to represent the sounds of this prehistoric language – and, unfortunately (but predictably), different scholarly traditions came up with slightly different ways of doing this.

Many English-speaking scholars use *y for this sound. Many German scholars take Latin as their guiding light, and write this sound as *i – though to distinguish it from the vowel *i, most scholars (but not all!) put a little archy-thing (technically, an inverted breve) beneath the letter, as *i̯, which indicates that it’s a consonant, rather than the vowel *i. Towards the end of the nineteenth century, linguists came up with the International Phonetic Alphabet (IPA) as a way of consistently notating sounds in a way independent of the spelling conventions of any particular language, and the IPA’s conventions specify that this sound would be notated with *j, agreeing with modern German convention. 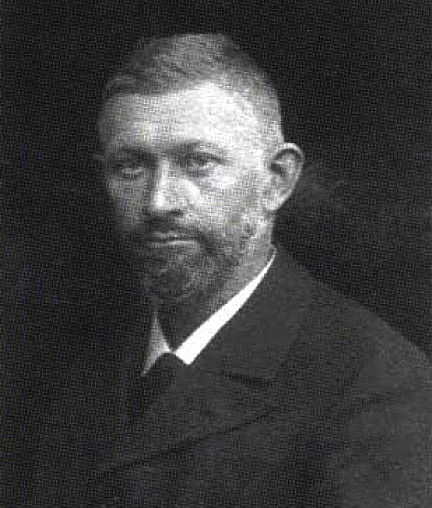 For the purposes of this series, I’m going to use the IPA symbol, and write the PIE word for ‘yoke’ as *jugóm. This is a bit of a minority practice in Indo-European linguistics, where either *yugóm or *i̯ugóm would be more normal, but there’s not really any good reason not to use the IPA symbol in this case (there’s no real doubt about its pronunciation, for instance). Actually the biggest reason why I’m doing this is to keep consistency with how we notate Proto-Germanic. For Proto-Germanic, the standard practice by scholars is overwhelmingly to use *j – the form of the word ‘yoke’, after Grimm’s Law and a couple of other changes, was *jukaⁿ. Since the first consonant is pronounced the same in PIE and Proto-Germanic, I think it’s a little simpler to just write them the same too.

There’s a similar variation with the w-sound, where some scholars write *w (in keeping with modern English, Proto-Germanic, and the IPA), while others write *u̯ (and a few even just write *u). I’ll go with *w. Again, as with the ways of writing the y-sound, this is just a matter of scholarly notation, not a point of any real substance. We all agree on how the sound was pronounced in PIE, but there are different traditions of how to indicate it.

So far, if we include the doubtful *b, that’s 13 of 25 consonants. What about the other 12? These involve types of sounds that are further removed from things we’re used to in modern English, and are worth giving a bit more space to. These are sounds like the ‘weird velars’ of PIE (e.g. *ǵ and *gʷ), the ‘voiced aspirates’ (*bʰ, *gʰ and the like), and the notoriously algebraic ‘laryngeals’, *h₁, *h₂, and *h₃. Not only do most of these look a little strange when you first encounter them, but they also touch on some important (and often controversial) questions of just what early Indo-European was like linguistically, and how it developed and changed over time.

It's been pointed out that I haven't said too much about the word family of yoke, even though there's some interesting things going on, so here's a little more on words from the same root (just what a 'root' is, I'll get to later on). In addition to the inherited word yoke, English has borrowed related words from other Indo-European languages. Most of these are from Italic. Latin gives us things like sub-jug-ate, con-jug-ate and the rather different con-jug-al, while its descendent French gives us one of our more basic verbs, join (this one's not so obvious, but it also goes back to the same *jug- base). Greek gives us the biological term zygote, which is, despite appearances, also from the same base. And from Sanskrit we've taken yoga (Sanskrit yógaḥ), which means something like 'union' or 'joining', and is a close cousin of yugám 'yoke'. 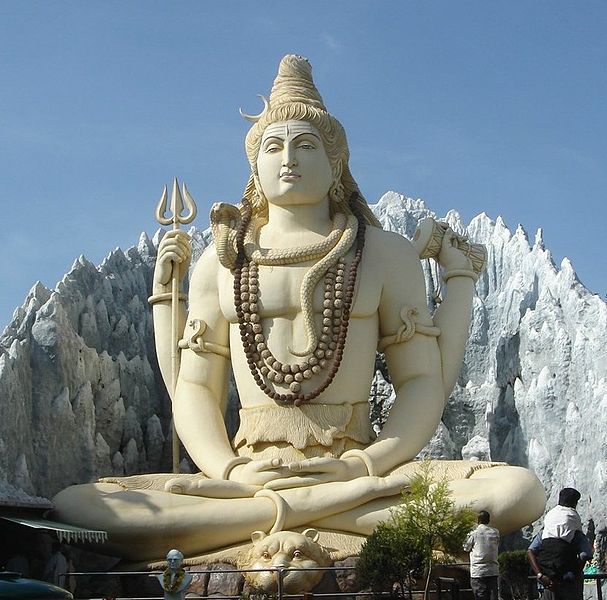 If you’re interested in more details about PIE phonology (or linguistics in general), the best general introduction in English is probably Benjamin W. Fortson IV’s Indo-European Language and Culture: An Introduction (2nd edition from 2010). Fortson is very clear and methodolical, and will give you a very good idea of the ‘mainstream’ reconstructions of PIE today. (As an added bonus, he also has fairly sizeable chapters on each of the major Indo-European branches as actually attested.) I’ll be mentioning some other handbooks and references for PIE as we go along, but for a single recommendation to top the list, I have to go for Fortson.

If you were intrigued by the interchange between i and j, u and w in this post, you might watch this fun video on the post-classical history of the Latin alphabet. It’s a short video, so it doesn’t go into some of the complexities, but it should give you a taste of how i split into i and j, and how a single u~v letter split into u, v, and w. There are also some points of linguistic substance, not just letter forms, to be made here, Basically, i and j are pronounced basically identically, as are u and w, and the main differences involve whether they’re used as the core of a syllable (as vowels) or not (as consonants). In PIE, this led to a lot of interchange between the two in some very regular ways. We’ll talk about this a little bit more later on.

I’ve brought up the International Phonetic Alphabet, which is a useful thing to know about if you’re at all interested in languages or linguistics in any capacity. I personally think it should be universally taught in schools, but sadly this is rarely the case. If you want to find out more, there are a good introduction for English speakers on Wikipedia. If you want to hear audio samples of any sound, there’s useful resources on both Wikipedia and the International Phonetic Association’s own website, where you can hear the sounds pronounced by some of the world’s leading phoneticians. If you want to know more, there’s always the Handbook of the IPA, and Peter Ladefoged’s A Course in Phonetics (now up to the 7th edition, in 2014) remains an excellent introduction to phonetics in general. You can easily input IPA symbols yourself here. 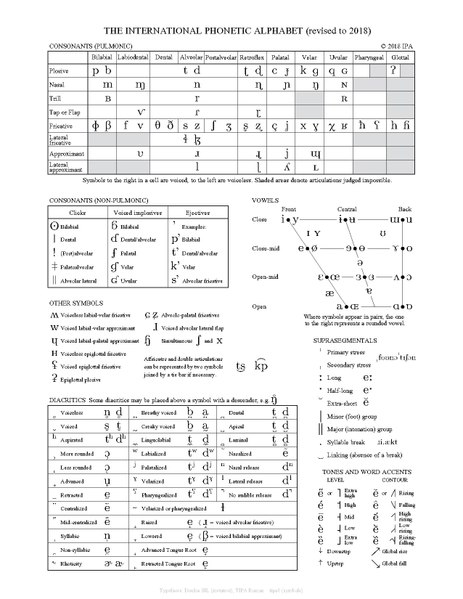 This one-page summary chart of the IPA is familiar to any linguist.

Maybe when some of you read this, you went, ‘But Nelson, how can you say things like PIE *t, *d, and *l should be pronounced just like the modern English letters?’ To all you pedantic hordes: I know, I know, there are a host of interesting issues about phonetic detail and phonological representation going on that I just glossed over. In English, the difference between d and t isn’t really one of voicing, but of aspiration, so that d is ‘really’ IPA /t/, and t is /tʰ/. In PIE, the standard view is that it really was a matter of voicing, so that PIE *d was */d/, and *t /t/. I don’t think this is the sort of thing most people need to worry too much about, but if you are one of us strange people who finds theoretical phonology interesting, I recommend the excellent (though inevitably technical) 2005 paper by Patrick Honeybone, ‘Diachronic evidence in segmental phonology: the case of obstruent laryngeal specifications’.

If you’re not quite sure what that last paragraph was about but would like to know more, there are a whole slew of decent to good introductions to phonology (the study of how sounds are linguistically organized, contrasting with the closely related field of phonetics, which deals with the physical production and perception of sounds), including Gussenhoven &  Jakobs, Hayes, and Carr & Montreuil.

Next up: Raw
Previously: Fart